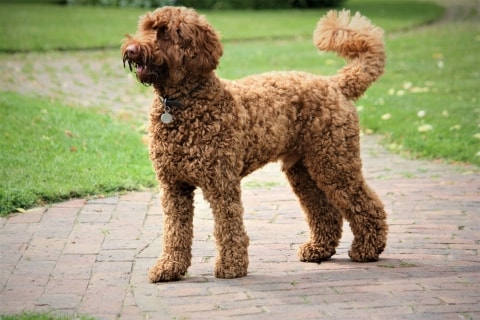 The Labradoodle is a hybrid dog breed that emerged in Melbourne, Australia in the late 1980s. The first litter of puppies came from a Labrador Retriever and a Standard Poodle in an attempt to breed a low-allergy guide dog.

The name ‘Labradoodle’ was a hit and the breed has been sought after in Australia and around the world ever since. It is often credited as the dog breed that kicked off the popularity of poodle-mix breeds like the Cavoodle and Spoodle.

Unfortunately, some early Labradoodles were produced by amateur breeders and had many health problems. As such, be sure to only approach reputable registered breeders if you are in the market for a Labradoodle puppy. Fortunately, there is now more industry regulation and oversight.

Studies have shown that most Labradoodles have more Poodle genes than Labrador genes.

Physical Appearance of the Labradoodle

Labradoodles have long legs, a lean body and droopy ears. They have a shaggy coat that comes in many textures, from woolly and curly, to long and shaggy. One of the benefits of this breed is that they don’t tend to affect allergy sufferers. They are often described as a hypoallergenic dog breed.

The Labradoodle comes in many shades and combinations of colours, from black to red, to golden or even blue or silver.

Labradoodles are very friendly dogs that are confident and social with people and pets. However, they can be boisterous when excited and may knock over small children. Therefore, be sure to get your dog to puppy pre-school from a young age.

The Labradoodle is intelligent and eager to please. As such, they often become therapy and assistance dogs. However, the breed doesn’t make a great watchdog as they are calm and friendly with most people. 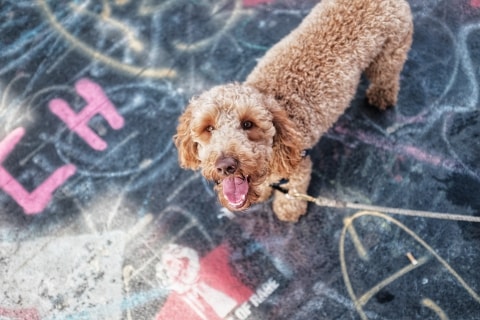 A visit to the dog park or a generous walk daily is a good idea to keep your high-energy Labradoodle happy. This dog is adaptable but suits a home with a good-sized backyard to stretch their legs and sniff.

Living with a Labradoodle

A Labradoodle’s coat generally doesn’t shed much or cause allergies, making it a great breed for many people. However, Labradoodles with woolly coats need to visit the dog groomer every six weeks to keep their thick coat in check.

These intelligent dogs love to run, play and make new furry friends. Therefore, it’s best that your Labradoodle has company during the day. Furthermore, leaving your dog alone for hours can result in problem behaviours, such as chewing and digging.

Labradoodles are a healthy breed with an average risk of illness. However, it's still a good idea to chat with your vet about disease prevention through diet and exercise.

Be sure to watch out for these illnesses that might come up, though most often in older dogs:

Many healthy Labradoodles can live to about 12-14 years of age. 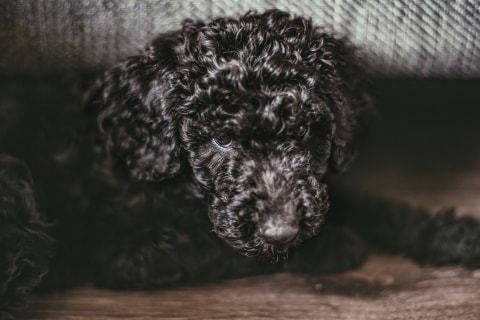 The pay-off for a Labradoodle's low-allergy coat is visits to the dog groomer every six weeks or so. Furthermore, dogs with thick coats should have a good brush a few times a week too.

Prevent tear stains and ear infections by gently wiping around your dog's eyes and ears. Additionally, you should brush your dog's teeth to prevent plaque and gum disease. As such, it's a good idea to chat with your vet about dog toothpaste and dental chews.

Do you need someone to keep your Labradoodle happy while you are busy? Pawshake is the answer for you and your furry friend! Start searching for a dog sitter in your area today.

Pets and back to school separation anxiety

Does your pet fret when the school term starts? This is normal, considering the change of routine. Here's how to keep them calm and happy.

The French Bulldog, or 'Frenchy' as they are often known, is a charismatic and loyal dog breed. Here's how to keep yours happy and healthy.

Separation anxiety and how to prevent it

Worried about returning to work and stressing your pet? Learn how to avoid separation anxiety by helping your pet adjust to your new routine.